skip to main | skip to sidebar

The Essential Method of Seated Meditation

Continuing our series of excerpts from the Zen Tea Record:

“Effort to discern your original nature through handling tea utensils is none other than a teaching of seated meditation. “Seated meditation,” however, is not still and silent sitting alone. Such practice is termed “seated meditation of dark realization,” and Tendai sages too have rejected it. The essential method of seated meditation lies in performing it whether leaving or arriving, whether sitting or standing. In chanoyu also, then, you should practice without indolence whatever you are doing.
“It may be doubted that such activity in chanoyu can be [meditation]; ultimately, however, it depends on the person performing it. For practice of chanoyu is a matter of striving always—in the same way as when you enter a tearoom and serve or drink tea—to conduct yourself with all integrity, dedicating your whole mind, without any negligence whether walking, standing, sitting, or reclining. If you act employing this attitude, without any lapse, in both the movement and stillness of daily life, then without any exertion of thought, all matters will be well disposed; the proper relationships of lord and vassal, parent and child, and person and person will spontaneously reach their ultimate fulfillment.
“In the contemplative method of sitting meditation, a jumble of innumerable thoughts float up to torment you, but through profound exertion—in that exertion itself—they may be suppressed so that stray thoughts cease to arise. Nevertheless, since fundamentally one performs it without relying on any forms, the single thought of practice may become entangled with other thoughts so that one falls easily into the distress of confusion.
“With the Way of Tea, however, you actively move your body and take up various articles, directing your awareness to them. Thus, you are not overwhelmed by these diverse thoughts and feelings, and your endeavor is easily fulfilled. It is the superlative Way that emerges from the wondrous wisdom of Zen master Ikkyu and indeed deserves our appreciation.”

I’ve heard people who practice both Zen and chanoyu say the same thing as above—that doing something while meditating makes it easier to focus your mind. But it’s something that’s hard to embrace when you’re actually preparing tea, because there are always so many things around you that need attention. If you’re focused on meditating, are you also paying attention to your guests? It is possible, but it’s not easy!
Posted by Morgan at 6:36 PM No comments:

Here’s another passage from the Zen Tea Record. This is short, but I wanted to give you this one by itself because there’s a lot of food for thought:

“Comprehension requires resolve, not the dogged passage of months or years in study. Since the thought of aspiration may be shallow or deep, you must strive with wholeness of heart solely to fulfill your resolution and practice chanoyu-samadhi.”

I remember in my early years as a student of chado that I would often sit in lessons and let my mind wander – as any student does in class, I guess! – and not pay attention to what was going on. It’s easy to get out of the habit of focusing on what’s happening, especially if you’re not learning anything new at the time. Even now I sometimes forget to pay attention when I should be. That’s the key lesson: resolve never goes out of style!
Posted by Morgan at 11:54 PM No comments:

“Immerse your heart and mind fully in it alone…”

We had our New Year’s tea gathering, Hatsugama, this past Sunday at the Horticultural Center in Fairmount Park. This was our first Hatsugama as a Tankokai association, and also our largest gathering ever, with 20 guests!

Here’s a photo of the group together: 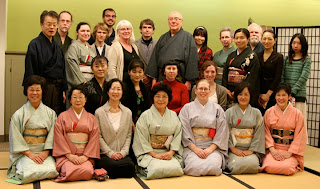 We did our usual full meal, with a tenshin tray, miso soup with shrimp and mochi, jubako with more traditional New Year’s food, hashiarai (a light broth to wash off chopsticks) and hassun with lobster and gingko nuts. And, of course, hanabira mochi to kick off the thick tea! 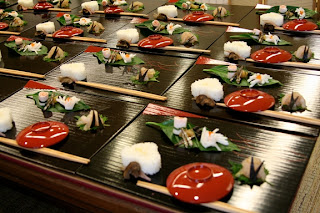 So here’s an example of how sometimes we have to improvise when the unexpected happens . . . tenshin trays (in the photo above) are made of lacquer, and so you can’t use any kind of ceramic plates on them. We were going to use little boards made of cedar to put food on, but there was a miscommunication about who was bringing them, and at the last minute we didn’t have any. So then we thought, okay, we’re in the Horticultural Center—there’s got to be leaves somewhere we can use! Off we went to search the building. As luck would have it, they were having a plant sale that day, and we found a peace lily with leaves just the right size. Definitely not a traditional Japanese plant, but I kind of like the idea of starting the year with a piece of peace!

Here are a few more photos from the event… 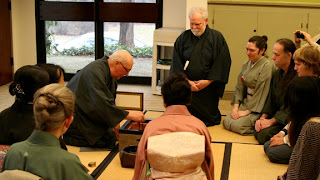 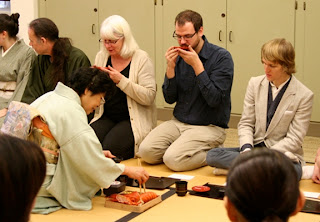 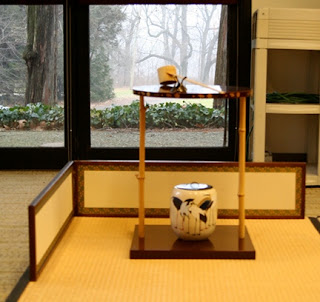 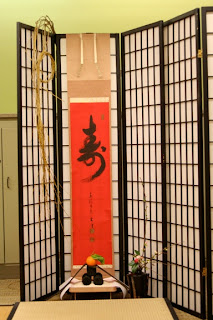 It was great to see everyone, and we’re already looking forward to next year!
Posted by Morgan at 11:31 PM 1 comment:

The Year of the Snake

A happy brand-new 2013 to all of you! This year is the year of the snake in the Chinese zodiac that the Japanese also use. Throughout the year, but especially around New Year’s time, we use tea utensils with snake imagery to celebrate the coming of the season.

The Chinese zodiac is a rotating cycle of twelve animals, and people born in the year of a certain animal are thought to have certain characteristics (just like the twelve zodiac months in Western astrology). If you are going to be a multiple of 12 this year (24 years old, 36, 48, 60, 72, etc.), then you are a “snake” person!

People born in the year of the snake are said to be very intelligent and wise; they love exploring new ideas and having stimulating conversations, although they also get bored easily and can sometimes be impatient with others. They are deep thinkers who tend to act logically and methodically and are also very determined and ambitious, which can bring them good fortune in money matters. They can also be very materialistic and love to have the very best of everything, so they can easily spend to excess if they don’t watch themselves. They tend to be very self-contained and self-reliant, although they can also be very caring and compassionate friends.

Regardless of what year you were born, the year of the snake is a time for slow, steady progress in both business and personal affairs. It’s important to maintain your focus and discipline and not take risks, because this is not a time when they’re likely to pay off. Historically, snake years have also been times of turbulence, even violence in international affairs, although this year is also associated with the Chinese element of water, which tends to bring a calming influence. It may also be a good time to travel, but choose your destination carefully!

Wherever you go and whoever you spend your new year with, have a wonderful, prosperous time!
Posted by Morgan at 5:33 PM 1 comment:

There’s big news for our tea group that as of today is officially official: We have been approved as a kyokai, that is, a chapter of our parent school, Urasenke.

What does this mean in laypeople’s terms? First of all, it’s recognition for our group. Rather than our tea students and teachers being members of Urasenke New York, we’re an independent organization, which means little things like being invited to official Urasenke events in the U.S. and abroad, and big things like being able to send our students to study in the main school in Kyoto. It means some responsibilities, like maintaining a high profile in the Philadelphia area and continuing to reach out and do demonstrations, gatherings, and be involved in the community. It also means some benefits, like getting referrals from Kyoto and also support for our classes.

We’ve been working on this for a while now, and after some false starts and a lot of preparation, our application was approved this summer, with our official start date being today, September 1, 2012.

It’s especially apropos because it was twenty-five years ago—to the month, actually—that Brother Joseph Keenan officially established the tea group at La Salle University that would become our kyokai. He passed on a few years back, but I’d like to think that he’s watching over us, and that he’ll be there in spirit when we celebrate our inauguration as Chado Urasenke Tankokai Philadelphia. (I know, it’s a mouthful, right? But that’s the naming convention established by Urasenke, and if you know anything about Japanese culture, you know that the keyword is “conformity.” Just call us Urasenke Philadelphia. It feels good to be saying that after all these years!)
Posted by Morgan at 12:21 PM 4 comments: